‘DIAGO: THE PASTS OF THIS AFRO-CUBAN PRESENT’ AIMS TO SHOW HOW PAST INEQUITIES REMAIN IN THE PRESENT

‘DIAGO: THE PASTS OF THIS AFRO-CUBAN PRESENT’ AIMS TO SHOW HOW PAST INEQUITIES REMAIN IN THE PRESENT

It’s not likely anyone would call Juan Roberto Diago a brilliant colorist.

Rather, his palette skews more to the ashy gray and black tones of William Kentridge, who has employed charcoal drawings for years to evoke riveting dramas of injustice, inspired by his lengthy experience with systemic racist policies in his native South Africa.

That subdued palette has likewise served Diago well in his expressive critique of racial inequities in his native Cuba, a critique that metaphorically alludes to racist attitudes present well beyond Cuba.

“Diago: The Pasts of this Afro-Cuban Present” – now at the University of Miami’s Lowe Art Museum – brings together 40 works from 1993 to the present. It reveals the sweep of his career. He aims to show how inequities of the past, from slavery to post-colonial prejudice, remain embedded in the present.

Shortly before “Diago” opened at The Cooper Gallery, the artist told Cuban Art News he thinks there are multiple ways to engage with the legacy of African culture.

Railing against tired thinking about art with ties to Africa, ideas possibly shaped by vintage magazine issues of National Geographic, Diago added, “The vision of the Afro-diasporic culture is more than masks, more than big breasts or buttocks. It’s more than a skin color. A space like this allows the possibility of expressing ourselves, in our own voice.”

At the Lowe, a jagged, raw energy stemming from Diago’s own voice informs “Landscape I,” with its network of lean gray-toned strokes, providing the artist’s own twist on the constructivist grid of Latin American master Joaquin Torres–Garcia. This uneven grid portrays an airless space crammed with boundaries and enclosures. There’s no lush, emerald green landscape here to conjure the cliches of a Caribbean island paradise.

Diago’s “My History is Blood” presents a stark, jittery portrait of a mostly featureless face with drawings of what resemble cowrie shells, used in African divination rituals, placed where eyes would be. Dense, undulating streaks of red and black drip to the canvas edge, concealing whatever body parts might belong to this face.

Born into a family of cultured intellectuals, Diago surely grew up well aware of his rich Afro-Cuban heritage. His grandfather was the artist Roberto Juan Diago y Querol, whose work was shown in the landmark 1944 “Modern Cuban Painters” at New York’s Museum of Modern Art. He also is related to the Urfe family of avant-garde Cuban musicians.

His somber palette is inspired by scarcity as well as racism he encountered as an Afro-Cuban artist in post-revolutionary Cuba. Like many Cuban artists whose career took shape in the 1990s, he worked with limited materials available in Cuba, generally known as the “special period.” The country’s economy had taken a nosedive when Soviet sponsorship vanished in the wake of the collapsed Soviet Union.

Today, his use of bleak, impoverished materials, such as rough wooden planks with peeling paint or cobbled-together scraps of metal, evoke shacks in rundown black neighborhoods, demonstrating how his art has long addressed Cuba’s pervasive racial inequities.

Possibly in a similar vein, “Ascending City” shows an expanding constellation of charred wooden boxes, like miniature shanties, scattered on the floor and along museum walls, where they’ve been mounted in varying heights. These boxes seem to rise upward in all directions, propelled by their own persistent strength.

Diago chooses scraps of wood and metal with uneven, raised surfaces, thought to recall keloids. Keloids are raised scars left on black skin as a result of physical trauma. They can by extension be symbolically linked to ongoing ramifications of slavery. Such blunt, expressive and rough-hewn materials are apparent in works from his series “Variations of Oggun” and the installation “Memory Footprint.”

As curator Alejandro de la Fuente explains in his essay for the exhibit, in the 1990s, Diago was one of numerous black artists who defied official Cuban propaganda claiming that the country was racially integrated and egalitarian; Cuban hip-hop musicians denounced police brutality against blacks.

“Diago” could hardly have reached Miami at a better moment. This exhibit joins Miami’s confluence of significant events exploring the nuances of Afro-Caribbean art and culture, illustrating its compelling presence on the international stage afforded by Miami Art Week.

Kicking off Miami Art Week was an official Art Basel Miami Beach event presented by the Lowe, featuring a conversation between de la Fuente and noted African and African diaspora scholar Barbaro Martinez-Ruiz about Diago and his art. It was moderated by Marilyn Holifield, co-founder of Miami MoCAAD.

Other events during Miami Art Week spotlighted the region’s burgeoning connections to art of the African diaspora and Africa, in tune with “Diago.” Among them were Prizm Art Fair, ongoing since 2013, and the provocatively titled exhibit “Who Owns Black Art?” presented at Miami Urban Contemporary Experience, an arts production company based in Little Haiti. It was organized by ZEAL, a multimedia group based in Los Angeles and New York City that supports black visual and performance artists, still too often overlooked or underrepresented in major art venues.

What: “Diago: The Pasts of this Afro-Cuban Present”
When: On view through Jan. 19
Where: Lowe Art Museum, University of Miami, 1301 Stanford Drive, Coral Gables
Hours: 10 a.m.-4 p.m. Tuesdays-Saturdays, noon -4 p.m. Sundays
Cost: $12.50 for adults and children age 12 and older; $6 for students; $8 for seniors; free for members, children younger than 12, UM students and faculty and staff, US military personnel, AAM members, AAMG members
More information: 305-284-3535; lowe.miami.edu
ArtburstMiami.com is a nonprofit source of theater, dance, visual arts, music and performing arts news. Sign up for our newsletter and never miss a story.
Top photo: “Ascending City” (2010) makes use of blunt, expressive and rough-hewn materials. (Courtesy of Jenny Abreu) 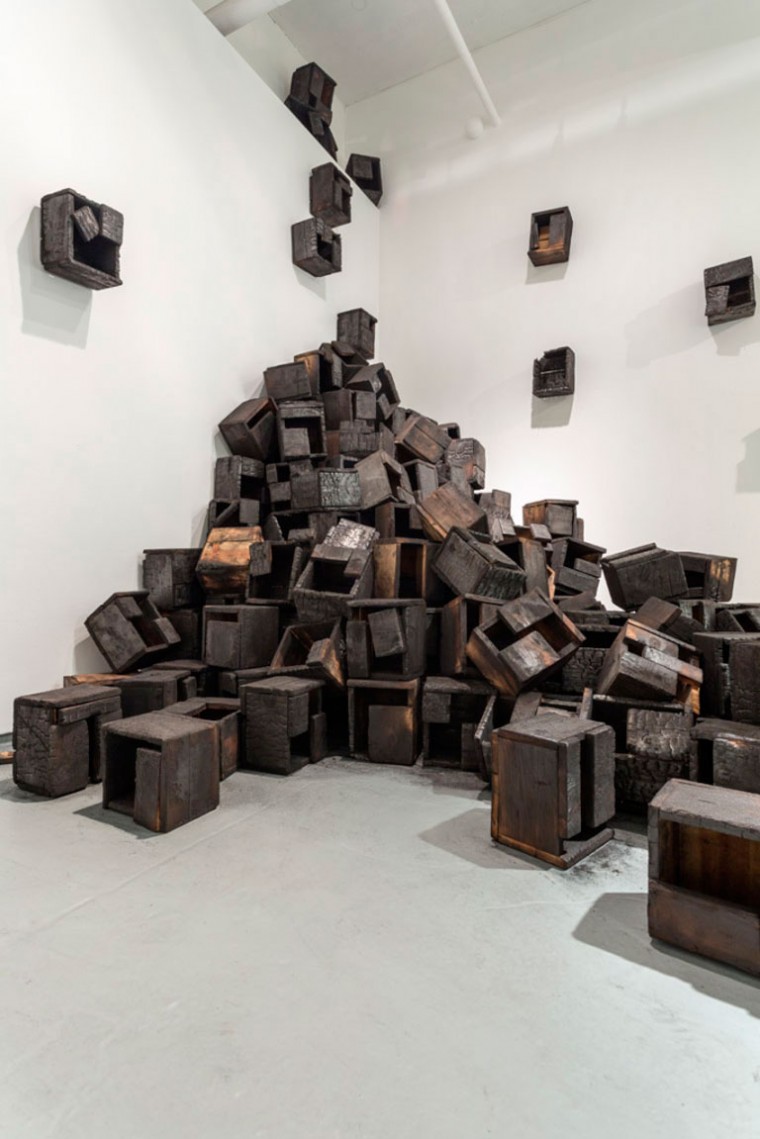